What is the difference between a rhinoplasty and septoplasty?

This is an excellent question, but the answer may take a while and be a bit technical so please bear with me:

Firstly, let's start with anatomy. The septum is the major structure that gives our nose its shape and size. It's primary function is as the skeleton for the nose. This enables the nose to stay wide open and not collapse when we breathe.

Septoplasty is referring specifically to either removing or weakening only the central portion of the septum. The L strut is left untouched.

This works well when the problem is only in the central septum. But what if, the problem is in the L-strut? You will then need to repair the L strut. This is called septorhinoplasty, or rhinoplasty for short.

To complicate things a bit more, there are also other structures in the nose that affects the airflow, such as the internal and external nasal valve. Again, these are not addressed in a Septoplasty, but would be addressed in a rhinoplasty.

Since you mentioned you have a crooked nose, there is a good chance this is due to deviations in the L strut (central septum is not visible externally).

This might mean that doing a Septoplasty alone may not be enough to solve your breathing issues, and will certainly not straighten the nose. A rhinoplasty will be able to address both.

Understanding the difference between a rhinoplasty and a septoplasty is key to help you to choose the best treatment to fix a crooked nose. Both surgical procedures are meant to target issues with the nose but they have different objectives.

RHINOPLASTY. WHAT IS IT?

A rhinoplasty or nose job is a general all-encompassing term for a surgical procedure that enables patients to correct the shape, size, symmetry of their nose. The term is more commonly associated with cosmetic concerns - a rhinoplasty is able to correct a nasal hump, or a bulbous tip or large and wide nostrils. However, reconstructive rhinoplasties are also performed for noses that have been deformed by trauma, for reconstruction of defects after cancer surgery and for reconstruction of cleft noses in patients with cleft lip and palate deformities.

SEPTOPLASTY. WHAT IS IT?

A septoplasty is a specific procedure that targets functional concerns with the nose, specifically relating to a crooked or deviated septum. The septum is the middle support of the nose that comprises of bone and cartilage and partitions the nostrils. Deviation of the septum from birth or as a result of nasal injury can lead to the appearance of a crooked nose, and difficulty breathing through one or both nostrils. As such, these patients would be an ideal candidate for a septoplasty procedure. A septoplasty can be performed alone or as part of a rhinoplasty procedure. It can also be performed as an open or closed procedure depending on the severity of the septal deviation. When performed as a closed procedure, a small incision is made in the inner lining of the nose to access the cartilage and bony septum, without a visible external incision. 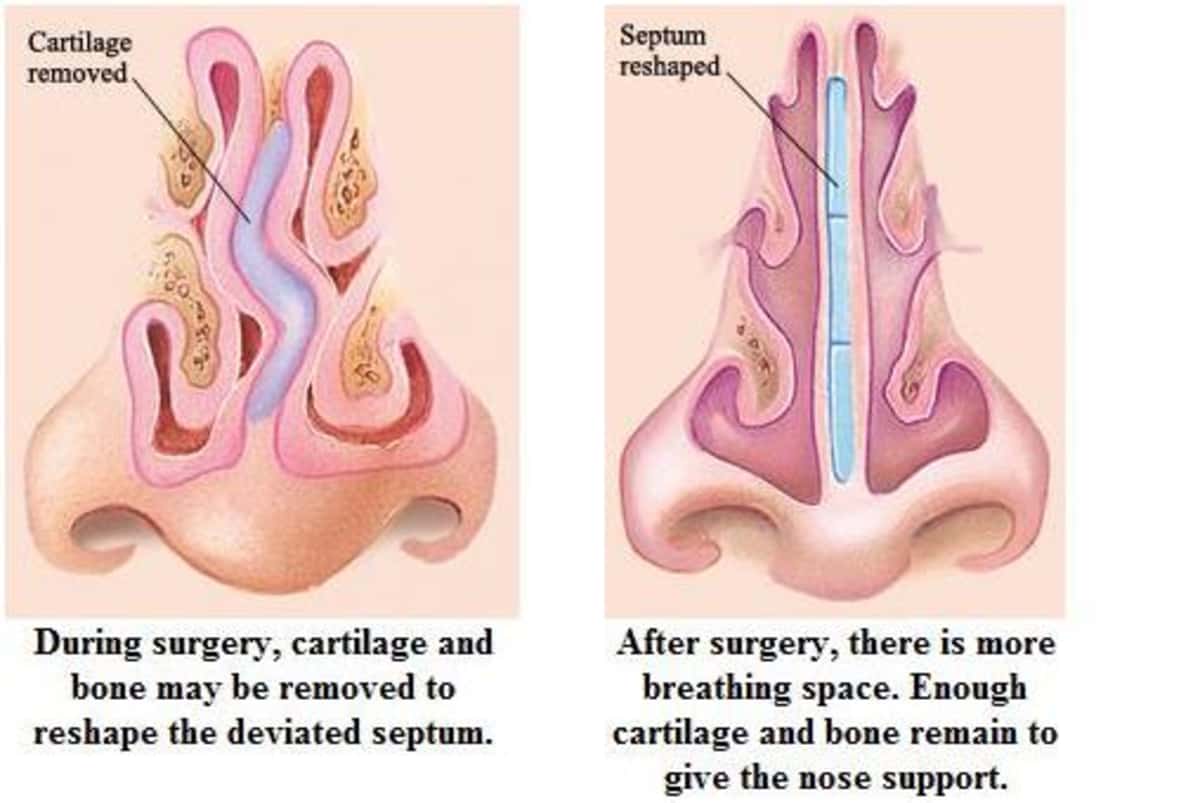 RHINOPLASTY AND SEPTOPLASTY. WHICH IS THE SURGERY FOR ME?

If you have a visibly crooked nose and a deviated septum that affects your breathing, a septoplasty can be performed with the main objective to fix a deviated septum, whilst leaving the external shape of the nose untouched. However, a rhinoplasty can also be done during the same surgery if you have intentions to correct other parts of the nose eg. dorsal hump, bulbous nasal tip or droopy tip.

I hope this answers your question. Have a great weekend!

Septoplasty alone to address a deviated nasal septum is not meant to change the shape and appearance of your nose, the aim is to improve the breathing and nasal obstruction. A rhinoplasty can also be done at the same time (Septorhinoplasty) to change the external appearance and shape of the nose.

When the deviated septum is mainly "internal", it is not necessary to perform a rhinoplasty at the same time to correct the shape of the nose.

However, in some cases, if the deviated septum and the external nose is deviated as well, then the combined Septorhinoplasty procedure would be medically necessary.

Septorhinoplasty can be functional or cosmetic, this will depend on the assessment by your surgeon at the time of consultation.

We recommend the bestdoctors based on your needs

Get Free Quote
Read this next
Request Quotes From Doctors

How can I reduce the protrusion of my upper lip?

Can I still get HA nose fillers after a rhinoplasty?

How to get the best results from a rhinoplasty for a crooked nose?

How is a septoplasty performed?

How much does a rhinoplasty cost in Singapore?

How does a septoplasty or rhinoplasty affect your sense of smell?

How do I prevent getting an infection after rhinoplasty revision?

Before a rhinoplasty, are there any medications that I should avoid?

What are the pros and cons of Radiofrequency turbinates reduction, septoplasty, and a mixed treatment of both in treating deviated septum and enlarged turbinates?

Our team is available on Whatsapp (8444 9163) to assist you with questions or recommend medical specialists to you.